15 things you can not do in Thailand - What Not To Do
News Update
Loading...

15 things you can not do in Thailand 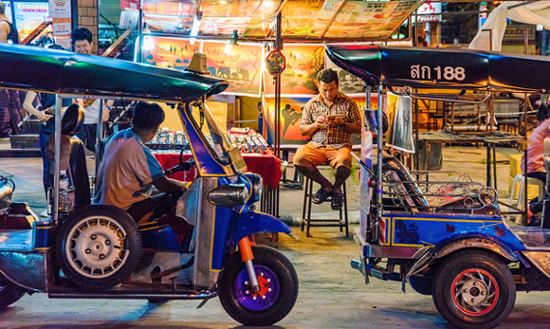 Thailand is an exotic country in southeast Asia, this country like other in Asia has many unique culture. So you should know what you must not to do there. I wanted to add precision by adding my experience because I think it's a bit vague.

1). "Do not criticize the King or the royal family.
In Thailand this type of behavior is not just considered rude: it is a crime against the monarchy that can be punished by a prison sentence!"

This is true in practice, but in theory it takes more than just a word in the air that would not be sufficient evidence in court so unless your conversation is recorded... Now, it seems wiser to s' refrain from criticizing, it would not bring anything to the host country anyway.

2). "Do not use drugs.
There it does not laugh but then not at all. If you are arrested in possession of drugs you will have the choice between paying a very large bribe to the police or ending up in prison for several years."

And here I can only confirm, in France there is rather laxity in this area, but here, some foreigners languish for some time even for a little grass...

3) "Never let a tuk-tuk or taxi driver take you to a gem shop.
This kind of plan always ends the same way: you force your hand to buy at an inflated price."

It's more of a waste of time than anything else, I never really heard that we were really going to force you to buy, to throw you out because you do not buy it yes... not to be sucked by drivers who take out the excuse of "Buddha day" or other to pretend that the Grand Palais or Wat Pho is momentarily closed, go check yourself but as it is extremely rare it is certainly false 😉

4). "Do not exceed the validity of your visa.
In Thailand you will be fined THB 500 per day and if you can not pay, you will end up behind bars."

This seems obvious... Knowing that the fine is valid especially if you present yourself to immigration, if you control on the street or otherwise and that your visa has expired, the fine and the consequences may to be heavier (even more so since a tightening of rules in 2015).

Note that there is a ceiling of 20,000 baht for the overstay fine. They will be a little less fussy if the overstay is found at the exit of Thailand via an international airport, like a day could not be counted, by cons, even exceeded a few hours, a day overstay will be counted if passage by terrestrial voice ...

The rule prevails as follows:

If you come to the immigration office yourself with:

If you are randomly controlled by being overstayed, you will be arrested with the consequence (at least):

5). "Do not point your feet at a Thai man.
This action is very rude and could get you into trouble: it's silly but it's like that." You have to know that the noble part of the body is the head and the feet represent the most impure part... In practice, it is not often that one has to point someone foot ... On the other hand, it is the same reason why one should not lengthen one's legs in the direction of a Buddha statue, but fold them on one's lap.

It's not more "stupid" than when you say "we do not show someone the finger, it's impolite".

6). "Do not drive without a helmet or a valid license or worse, having drunk.
In addition to the fine that hangs in your nose, a traffic accident in Thailand usually ends dramatically: it must be said that the Thais are crazy driving and when it hits, it hits hard! "

It's the same in France! There is no reason to do otherwise and it seems obvious! Yet when I see these young keke (I do not see how to call them otherwise) carefree especially in the southern islands roll no matter how helmet and believe everything allowed... And even tourists lambda, probably seeking to just "imitate" Thais, who actually tend to ride without a helmet...

I feel like a desire to fuck them in the literal way and I do not feel any pity when I see a spread on the road (and it happens more than you think!)

Damn, but why at home would you wear a helmet and here no! Stop wanting to do "like them", you will certainly not be better perceived / appreciated...

More generally, I would say that level conduct, there is worse than the conduct to the Thai in terms of "disorganization" (see India or Vietnam), but Thailand sadly accumulates the most death on the roads at the global level (sad record) because of a fast and uncomplicated driving style, especially motorcycles.

7). "Do not topless!
Such an initiative on your part would be very badly experienced by Thais (and especially Thai women)."

It depends concretely where, if you go on a small beach in the depths of Thailand, I think especially in the extreme south where the Thais are Muslim majority good there, yes, it could be frankly frowned upon, but on the beaches Phuket tourist, Samui etc... I do not think it will be particularly "bad experience".

8). "Do not wear your shoes indoors.
In Thailand, it is customary to remove one's shoes inside temples and houses. Not doing it is rude."

To have concretely already asked the question, it is not strictly speaking an impoliteness, but just an evidence not to dirty the interior of the house... For the temples, it is different, there, it is well a custom that goes beyond not messing up the temple...

This is true if you want to kiss greedily your half, take the hand, the size, stick a little is not frowned upon and is even rather become common (even between good friends), but it is true that despite the fact of being able to cross girls with shorts at the bottom of the buttocks, yes, the Thais are modest (there's only to see the scenes "of love" in their soap, ridiculous or nonexistent)

10). "Do not have unprotected sex.
AIDS is widespread in Thailand so be reasonable for your own good."

Another evidence that remains true everywhere, AIDS always exists so protect yourself when you do not know enough his / her partner seems essential.

11). "Stay cool.
In Thailand, individuals who are not able to control themselves are generally considered idiots. Never lose your temper and be firm with a smile if needed."

It is sure that it is not always easy to keep calm, misunderstandings, a confusion or sometimes the slowness of performance of the Thais could exasperate you, but you are here as a guest, respect their way of life, take on you and relax a little!

If not indeed (because it is not always abusing either) yelling, but with a smile 😉 It's the Thai attitude, it joins the famous face not to lose, and well do not especially lose the face to a Thai because here it could end badly...

12). "Do not negotiate the fare with taxis.
In Thailand, the law requires taxis to have a meter. The price will always be cheaper on the counter than negotiating at random."

Exactly, always ask for the "meter" if not close the door and take another, it is not taxis that are missing... After some will sometimes refuse to take you short, there too a law has just passed to force them to take any passenger, you can normally take their plate number and report them to the police if they refuse you.

But in practice, I think that few people do it (from a tourist point of view, the locals start complaining well) and if sometimes it's just lazy, they also refuse because they're late of work day and the place where they must take you is at the antipodes of their home, or sometimes the full of gas which it remains will be insufficient knowing that there is no station of gas in the direction there are not any street corners), the reasons are not necessarily good, but in any case, it is difficult to stay on the ground long given the number of taxis per capita.

13). "Never leave your passport on bail.
If someone asks you to leave your ID as a deposit, leave a photocopy." In general, it is always advisable to have photocopies of your passport with you, even if it is lost or stolen. The deposit will not always be accepted if it is only a photocopy, especially if the owner is a small shop, in this case, negotiated a deposit in cash, it can be done too, otherwise change shop In general, there is plenty of choice.

14). "If you are a woman, never touch a monk! It's strictly forbidden."
Yes, but in practice, you are not necessarily aware of this and the consequences will be minimal. Conversely, if a monk begins to touch you voluntarily ladies, distrust... because it is indeed abnormal.

15). "Do not throw your garbage on the floor.
A cigarette butt thrown on the floor may result in a THB 2000 fine. Be very careful in Bangkok because the most rotten policemen in Thailand are there and they like to watch the farangs and follow them until the offense. Then they fall on you."

This makes sense, same thing in France, the streets are not a trash, and even if sometimes, especially in the evening, the streets tend to be strewn with heaps of waste (before being picked up at night) is not a reason to have a minimum of respect.
Facebook Twitter Google+
« Next Post
Previous Post »
Comments